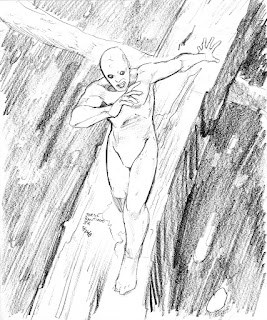 I'm posting this on 5/26 but it won't pop up on the blog until the 28th. I want to get ahead on these things so I can have more consistent updates on here. Anyhow, here's Iceman! Finding a proper pose for him took me longer than I thought, and I'm still not even sure if this is the best answer. I didn't want to compress him too much, which is probably the best way to show his forward motion, but because I chose this angle, drawing him compressed would just show a bunch of his back.

Unlike the Cyclops sketch, this one is probably most in the my style of drawing. I used my leadholder for this so I ended up making the lines thinner and I used a lot less shading on his body. I was sort of approaching this one as a drawing I may one day ink so it's just pencilling practice. It was a fun one though, and I do really like his hips and his left hand. They were pretty fun and easy to figure out.
Posted by Jorge Santiago Jr, at 10:00 AM