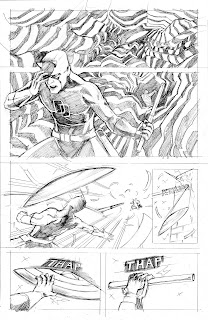 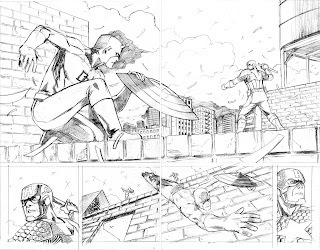 I received a really great portfolio review from Marvel's talent scout C. B. Cebulski in the winter quarter at SCAD, so I was given the chance to test my mettle on some Marvel scripts. Of the four in the pack, Daredevil by Mark Waid was the one I felt played to my strengths the most and this is what I came up with. Not my most recent work, but I felt I should post up some pages in between the digital onslaught of zombie things I've been posting and will be posting more of.

I spent most of these pages just trying to figure out how I would approach the characters appearance. I don't regularly draw superheroes it was tricky to find a way that was true to their costumes without going so far in the utilitarian realism style that it looks like a bad movie costume. For Daredevil I just had to bite the bullet and give him a body suit, I couldn't think of anything an acrobat who leaps off buildings would wear, other than a harness and safety equipment. For Cap I decided to just draw the Jerome Opeña design from the recent relaunch of Avengers. I really love Jerome's work so it fun drawing a design of his, although whether I did it justice is debatable.

There's a fourth page I still want to do but that can wait when school is out from summer break in a few weeks. I'm making progress I hope.