Curse of the Eel has 1 Million Views on Tapas!

Hello everyone, I wanted to post this before but my end of the year has been hectic, but Curse of the Eel has hit a really cool milestone! My comic has 1 million views on Tapas, which is amazing! I'm really lucky to have made a story that can be enjoyed by people, and I hope everyone will continue to enjoy Eel as the story enters its final acts!

Here is an illustration I made for the occasion! Thank you for reading! 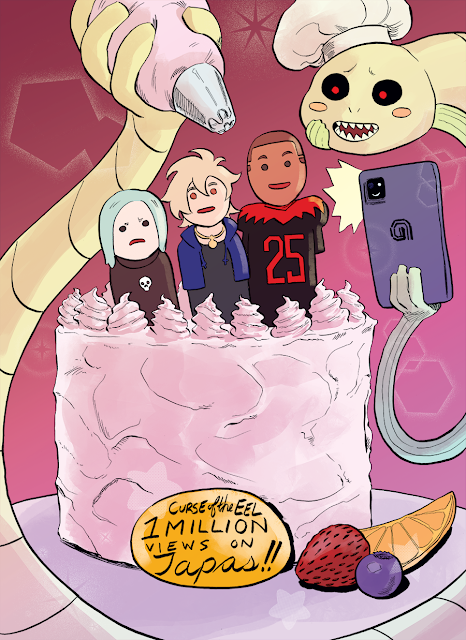 Hello everyone! So this is a really cool story so let me start off with that:

I've been really digging fantasy stuff in the last few years; after the pandemic, fantasy has been my number one genre and I've been working on more fantasy stuff like Illarys, but also making fan art for my favorite characters. I've been drawing a bunch of fan art for the Brimstone Angels Saga, a D&D series about twin Tiefling girls, which is written by the awesome and kind Erin M. Evans! She's shared a bunch of my drawings on social media (which is really cool when you get seen by the creator!) and I learned very quickly that she had a new original fantasy story coming out: Empire of Exiles! She was nice enough to send me an Advanced Reader Copy, so I could get a jump start on the fan arts, and she decided to commission me to create an illustration for this new book!

I'll include my progress stages here, including a TikTok I made of my inking process on this illustration, which was used as a pre-order bonus as a bookmark and a device wallpaper! I'm really excited to have gotten this opportunity and to have my first fantasy illustration be for Erin, who is both kind and amazingly talented. I read Empire of Exiles in like 2 weeks, and I loved it! Below is my interpretation of the inciting incident, as this is a fantasy murder mystery and not all is as it seems!

You can pick up Empire of Exiles from all major booksellers, it's published through Orbit Books, so you can find it at Barnes and Noble or your local bookstores (and if they don't have it, you can ask them to order it for you)! It's also available as an e-book and an audiobook! At the end, I'll include the book description that is listed on Erin's website. 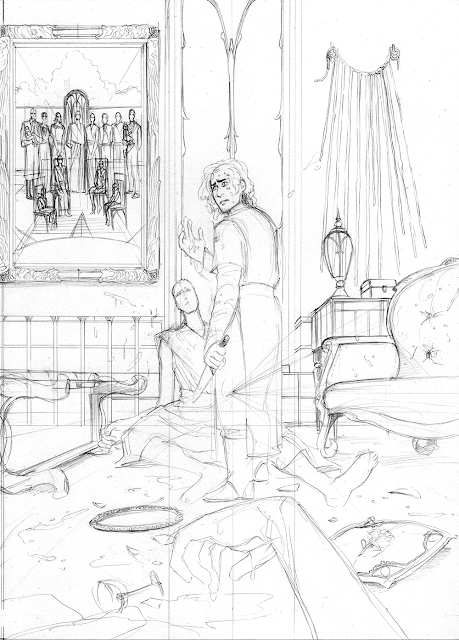 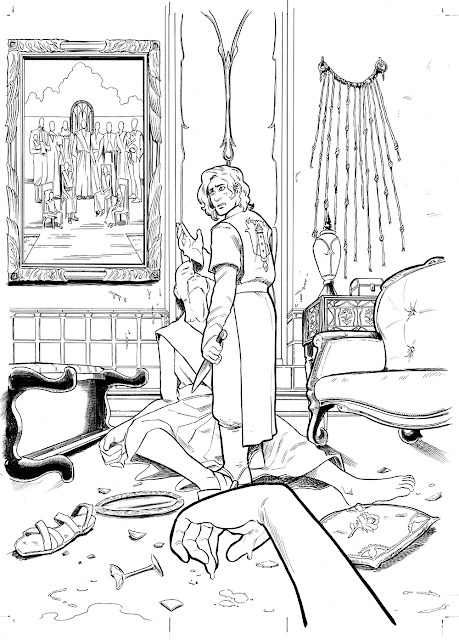 And here are the colors! 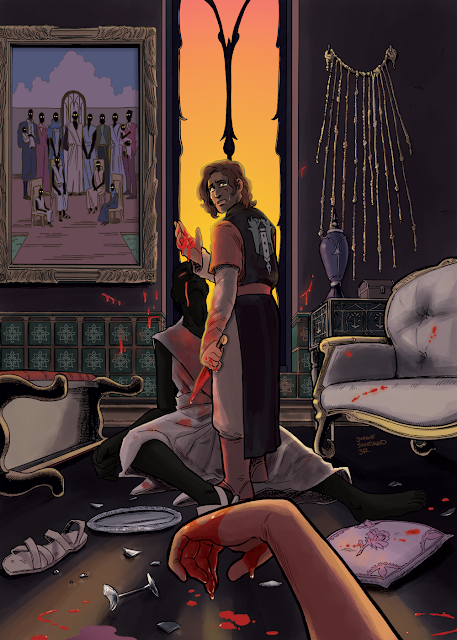 "Magic, mystery, and revolution collide in this fantasy epic where an unlikely team of mages, scribes, and archivists must band together to unearth a conspiracy that might topple their empire.

Twenty-seven years ago, a Duke with a grudge led a ruthless coup against the empire of Semilla, killing thousands. He failed. The Duke was executed, a terrifyingly powerful sorcerer was imprisoned, and an unwilling princess disappeared.

The empire moved on.

Now, when Quill, an apprentice scribe, arrives in the capital city, he believes he’s on a simple errand for another pompous noble: fetch ancient artifacts from the magical Imperial Archives. He’s always found his apprenticeship to a lawman to be dull work. But these aren’t just any artifacts — these are the instruments of revolution, the banners under which the Duke lead his coup.

Just as the artifacts are unearthed, the city is shaken by a brutal murder that seems to have been caused by a weapon not seen since the days of rebellion. With Quill being the main witness to the murder, and no one in power believing his story, he must join the Archivists — a young mage, a seasoned archivist, and a disillusioned detective — to solve the truth of the attack. And what they uncover will be the key to saving the empire – or destroying it again."

Hello everyone, it's almost been a year since my last post! I've been updating parts of the blog, but I've been so busy with art I can't share that this page has gotten dusty. Here's hoping I can be better about updating it, even if I'm still super busy with stuff I have to be careful about sharing.

What I can share, is Final Gamble issue 2's cover, which was announced on Band of Bards' Twitter! I'll include the final image here, and my process on it! I draw and color the Final Gamble covers, which is why they're a different color approach from the interiors, where Harry Saxon is doing an amazing job!

You can also add Final Gamble to your orders at your local comic shop! We're in Previews, so please ask you comic stores to order you copies of the book!

Okay, here's a look at the process for the cover: 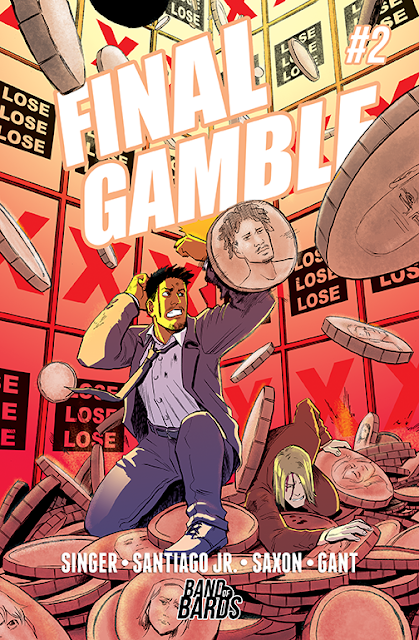 This was drawn and inked on Stillman & Birn Zeta paper, with colors done in Photoshop, and the icons on the slot machine walls done in Illustrator. This is continuing the motif from issue 1, where our leads, Jasmeet and Danny, are being thrown into a gambling machine but are threatened to being crushed by the system. 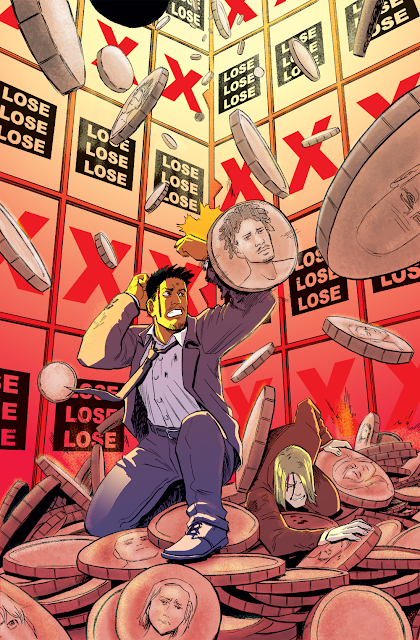 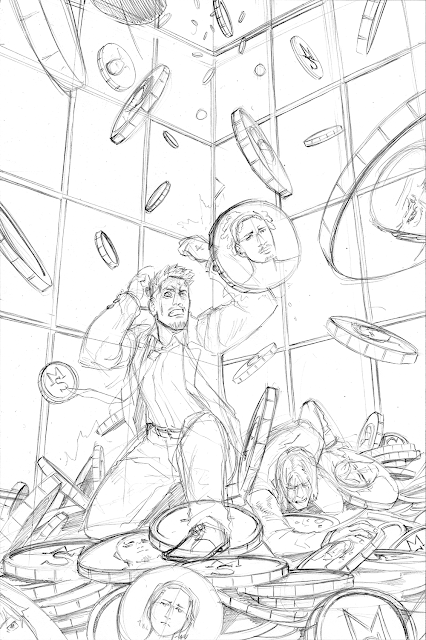