Here's a drawing of Pearl from Steven Universe, a bit smaller than the Garnet drawing, but it was a fun little illustration. Pearl is actually the hardest to imagine in my style, her features are very different from how I draw faces and it became tricky to figure out the best way to translate them. I think this turned out well, although it'd be tricky to draw her again. 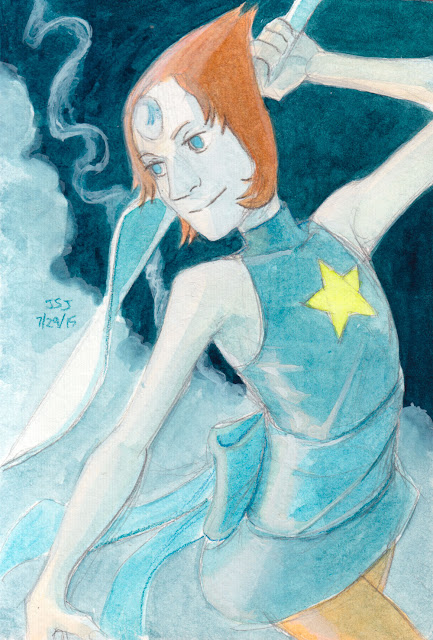 Hello all! I just finished watching the first season of Steven Universe, and I totally get all the hype. It's a great show, so now i have excuse to draw the characters cuz I love their designs. It's also a really progressive show, which I think is important right now to teach kids to be tolerant of everyone and judge people by their character, not what they are.

This Garnet was done all in one go, took me about 4 hours to paint, an hour to sketch. The drawing is about 5 or 6 total paints, all on my usual Stillman and Birn paper. The tricky part was using the carmine, a new paint in my palette but with gouache to smooth things out, it turned out well, I think. 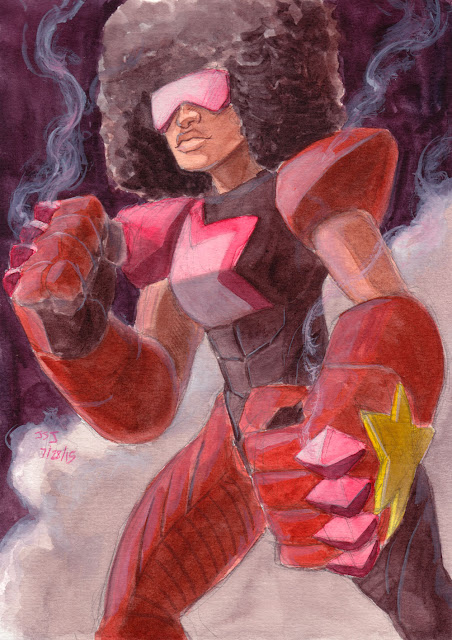 Posted by Jorge Santiago Jr, at 5:30 AM 0 comments

Why hello! I generally draw in my sketchbooks but I rarely make a post that is just sketchbook images, things I've just played with or trying out ideas. So here's a post from one of my new sketchbooks.

The other thing is, all of these are done in a new product from Stillman and Birn. I'm not really allowed to talk about what it is but I can at least show the work I've been doing in them. It's gonna make sketching in public 100x easier, and it's just plain a cool new product. I can't wait to get my hands on a few more, I'm almost done filling this one up (I've only had it since mid-June).

So yes, there's a lot of stuff here but I hope you all like it! 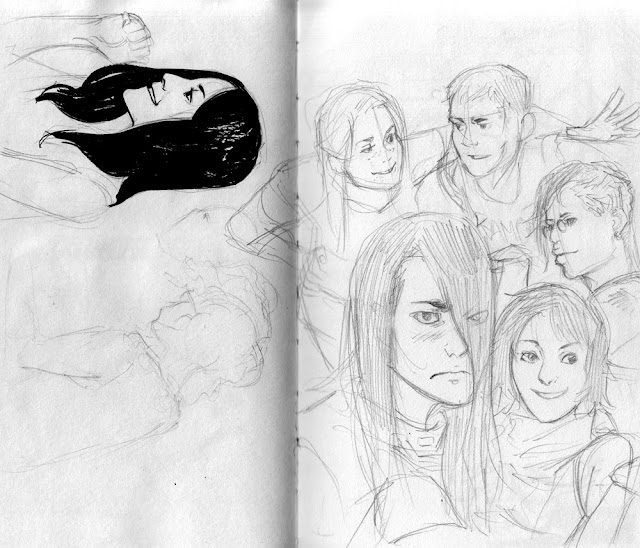 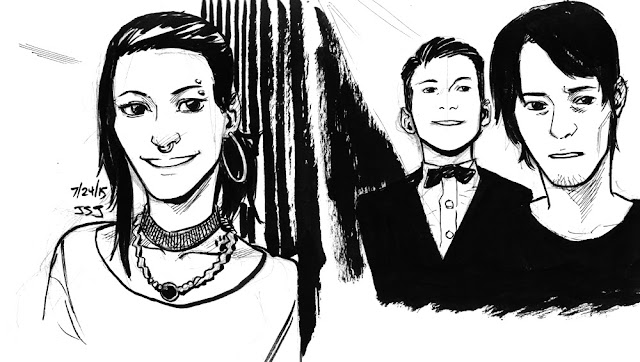 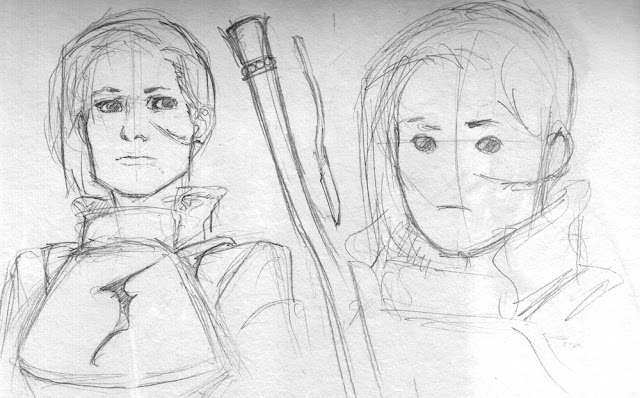 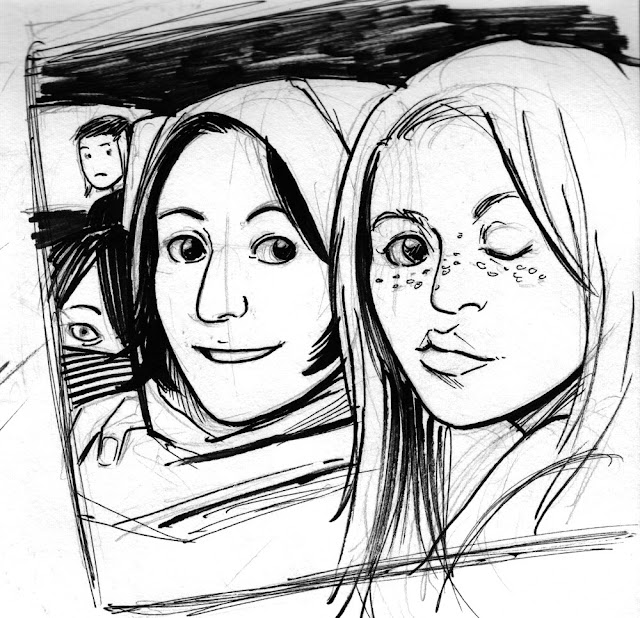 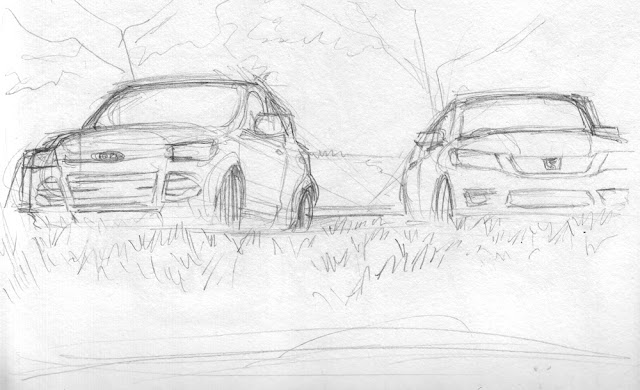 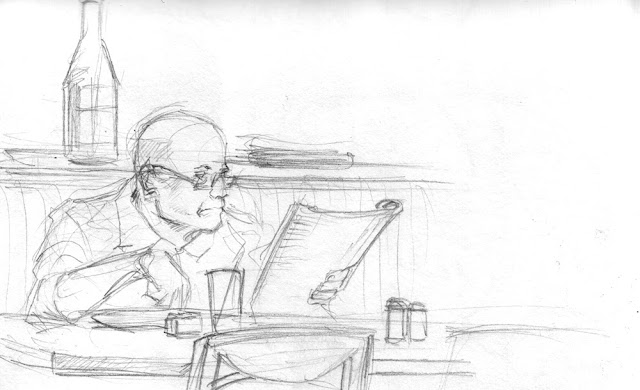 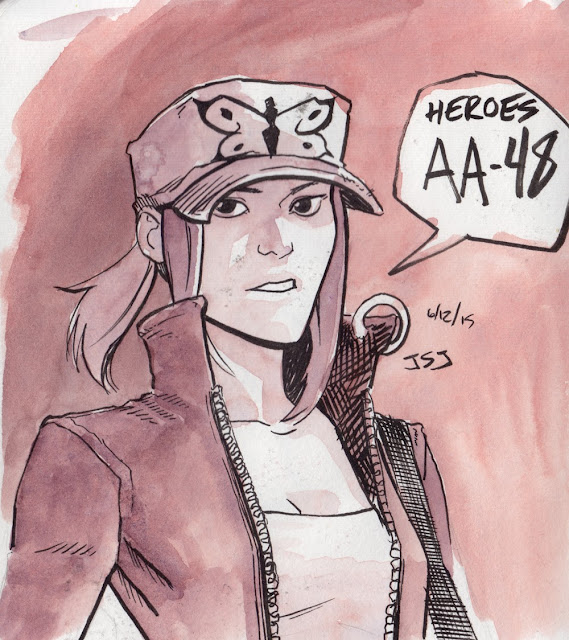 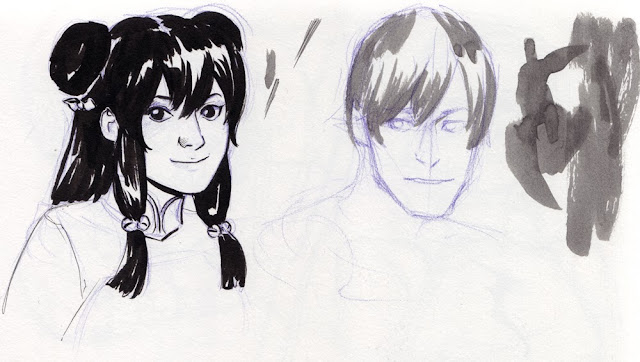 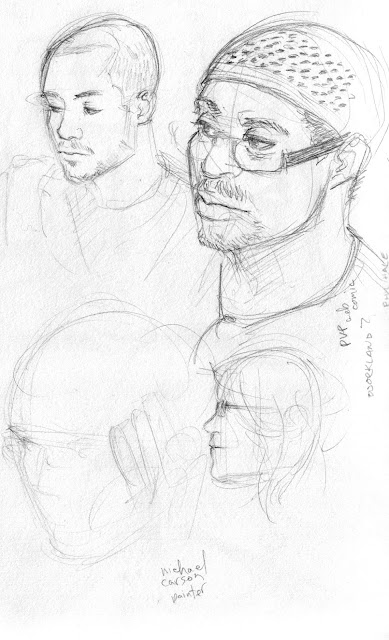 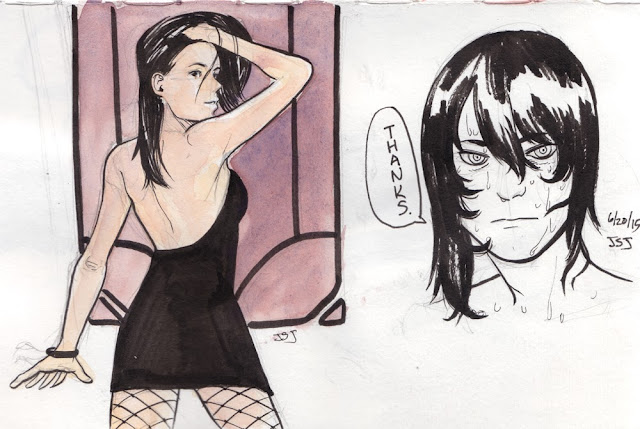 I drew this fan art because lately I have been watching multiple playthrus of P.T. on the youtube, and I just love that they're all so different. What the game does that is fascinating, is it lets you discover things at your own pace, but each person's game is different, in terms of what happens. Sometimes you get attacked, sometimes you don't, sometimes the ghost will appear in front of you, sometimes behind, it's nuts! I really hope that the team that worked on the game can make something all their own and cut Konami from it so they can go nuts. 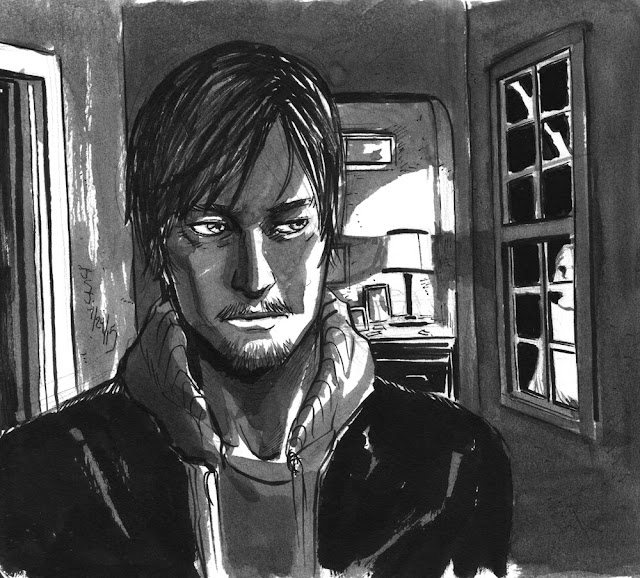 Tools: Zebra Brush pen, Pentel Hybrid Technica and a Pentel ink was brush (unsure of the name)
Sketchbook: A new Stillman and Birn product I can't quite talk about yet
Posted by Jorge Santiago Jr, at 6:21 PM 0 comments

A watercolor fan art of Jasper from Steven Universe for my super good friend, Scotty6000! Watercolor and pen on Stillman and Birn gamma paper. 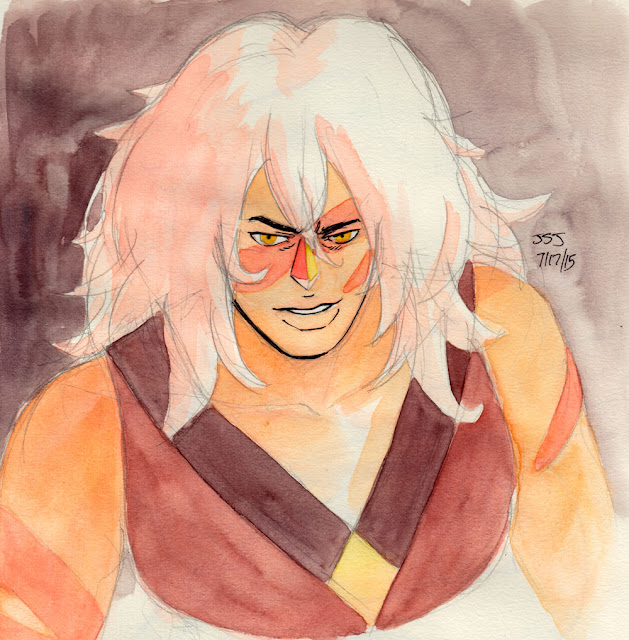 Hello again, this time with an update on Requiem Sonata. I've actually finished this chapter and have sent it to press to hopefully have books printed for SPX in September. I hope you all enjoy this sample and if you can, come by the table at the show! I'm also planning to start posting this as a webcomic soon, I'll post up more info when I have it.

Requiem Sonata is about the death of a famous classical pianist, Zhi, and how her friend, Detective Simone Durant, tries to solve the mystery of her death. 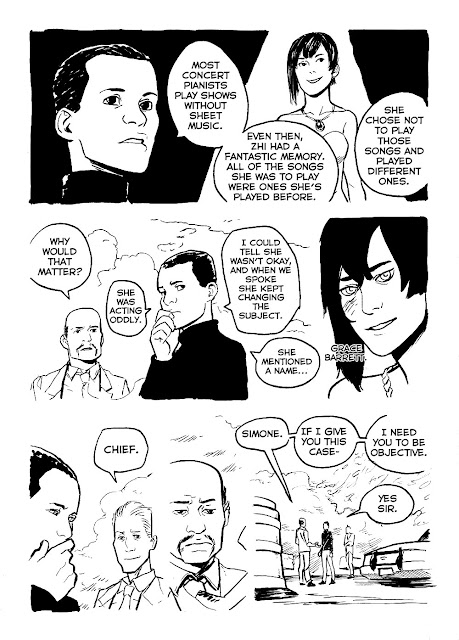 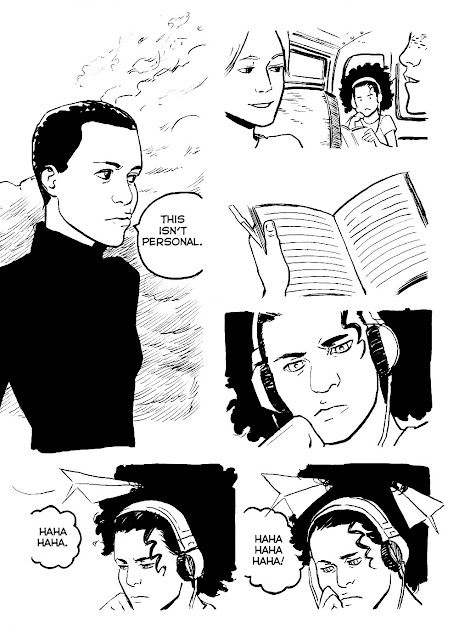 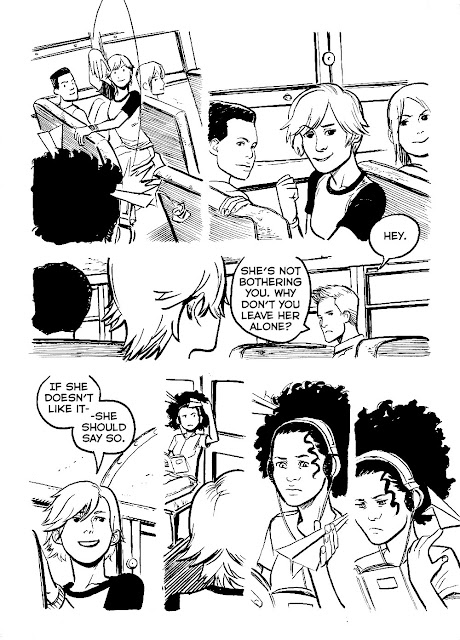 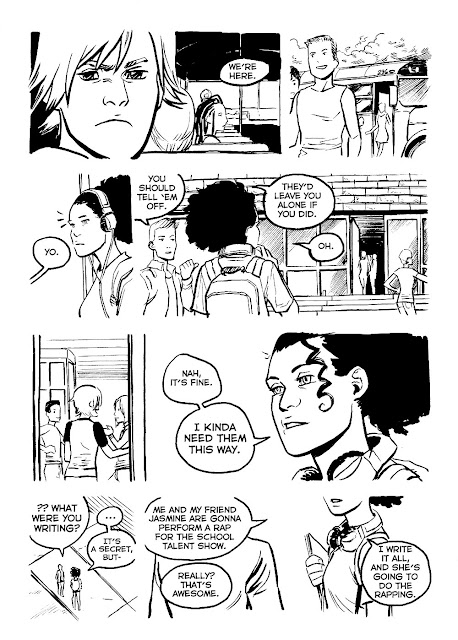 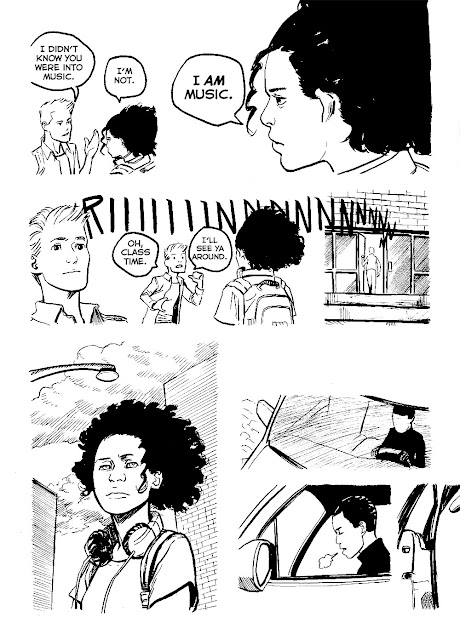 Desperately in need of a name, but here are some character designs I've been having fun with on Instagram, now fully scanned and color corrected. Here are the members and a short bio for each: 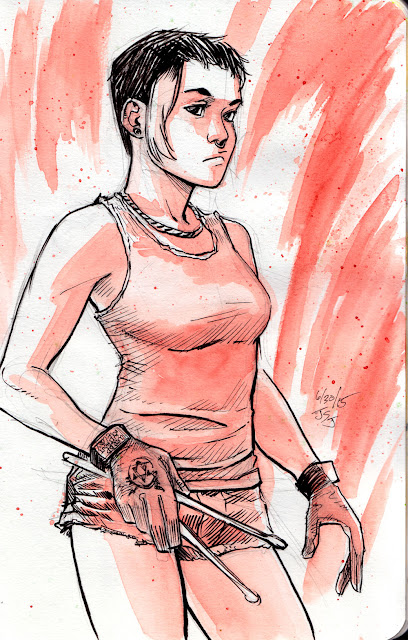 Mariah on drums, she assembled the band after getting annoyed with the other bands she was a part of. She's really driven to make music and to make it feel unique, but her enthusiasm wasn't shared by her former bandmates. She's tough, enterprising, and bold, not taking no for an answer and she leads the girls into battle with her amazing drum skills. 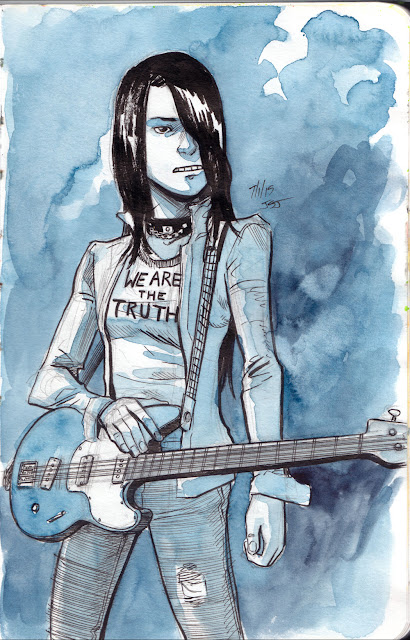 Sad-ko, not her real name. She got the name because her hairstyle reminds people of Sadako, the girl from the Ring. She's a Japanese student studying in America and enjoys the loud and heavy sounds of metal. She decided to join up with Mariah because she has more ambition than most people she knows and enjoys performing in front of a crowd. Sad-ko can play most instruments but the bass is her favorite. She'll also leave her bass to play other instruments when they need her for special songs. 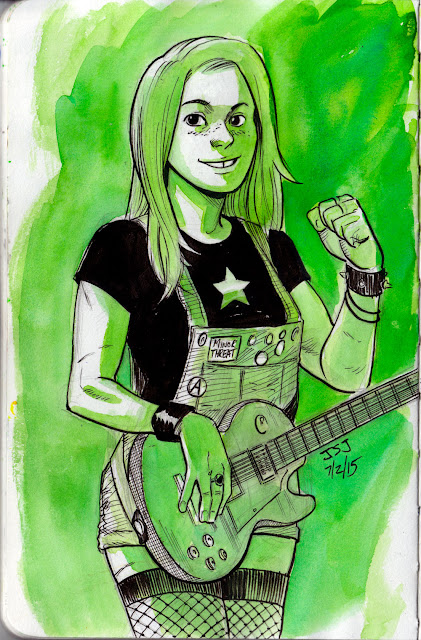 Carol Lynn is a country girl through and through. She grew up playing acoustic guitar, hoping one day to make it in country, but has started to enjoy the rebellious punk genre. She's currently clashing with her parents as the world changes, so she enjoys writing most of the melodies for the band. Carol is the most boisterous member of the band, she has no problem rough housing and throwing drinks back, and she will wrestle you down. She will, don't test her! 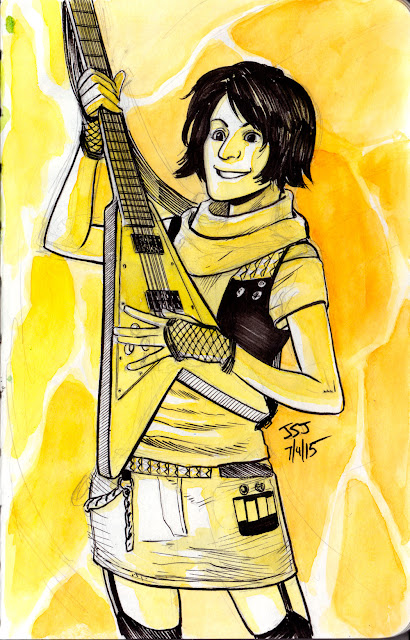 Amani is a young Pakistani-American woman who probably has ADHD. She is just bubbling over with energy, so to channel it, her parents have tried to get her into music. She's sampled every instrument, but the Flying V her parent's got her for her birthday is her prized possession. She joins the band to play music and also play the solos for the music. Her parents are huge supporters of the band and even go to some of the shows to take pictures for their site. Sometimes her brother is their roadie, when he's got the weekend off from work. Amani vies with Carol Lynn as the most boisterous member of the band, and the two have become best friends. 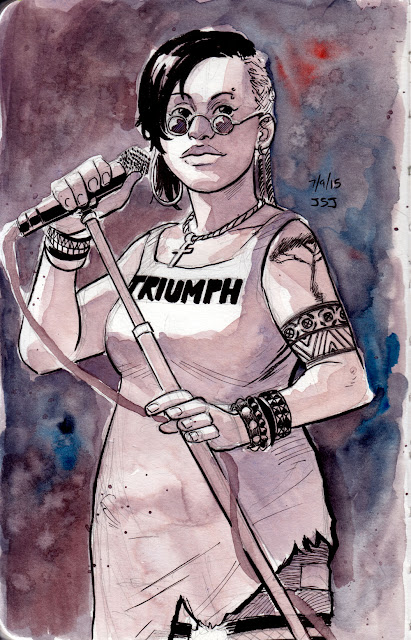 Makena is the vocalist for the band, coming from years and years of singing in the choir of her church. She's come into conflict with the strictness of the church and is taking a sabbatical from it to explore life and have more fun. Her faith is still important to her, but she also enjoys singing for herself and joins the band hoping for an open place to be herself. She chose pretty well!

Watercolor and Kuretake inks in my Stillman and Birn alpha sketchbook.
Posted by Jorge Santiago Jr, at 5:30 PM 0 comments

Here are the 2 stages of the landscape I drew yesterday. I was outside a Barnes and Noble in Marietta, and it wasn’t the ideal spot/layout/drawing/etc. I’m happy I finished it, just cuz my initial response was “oh wow this is messed up, just stop and do something else.” Which is a voice in my head I need to work on silencing.Overall, twas a fun experiment. I just inked everything in with no pencil underdrawing then added in watercolor for fun.

Kuretake brush pens for the majority, which were great cuz they’re waterproof like champs. I used a Pentel Hybrid Technica in spots, and it was great too, but it wasn’t as waterproof and shifted a little. I’m happy though, its an interesting texture. All of this was done on 11x17 Stillman and Birn Beta paper. 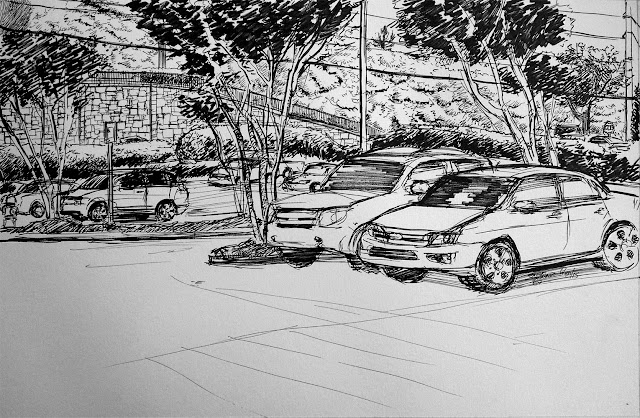 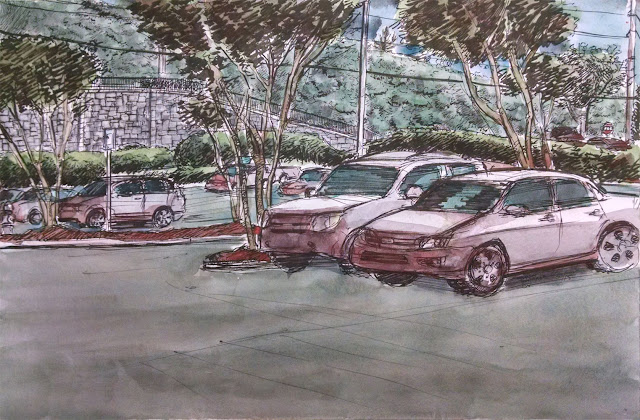