I got the chance to fly out to San Francisco last week and visit Riley Street Art Supply store for their anniversary sale! I went and spoke to a lot of really cool and inspiring people, I got to take in a few sights and also, do a little bit of sketching.

Shortly after arriving we crossed over the Golden Gate Bridge and it was just covered in fog. It was such an awesome sight to cross the bridge that we ended up pulling over for a second so I could do a sketch of it from Vista Point. I began with the inks, hoping that by the time I finished all the structure that the fog and mist would have lifted, but it just endlessly poured over the top of that hill. I only saw glimpses of beams and wires, and that made it even more interesting. After finishing the inks, we left for the hotel where I added the watercolor to the inks.

The next morning, unhappy with how the drawing just looked incomplete, I prepared some gouache with French Ultramarine Blue and started painting in the mist. I think this was a gamble that paid off as once the drawing was done, I felt like I managed to capture the feeling of this awesome architecture refusing to reveal itself by hiding in the mist. It's flowery and magical, but I write comics so that's just my imagination.

This drawing is also the thesis of why I love Stillman and Birn sketchbooks so much. This was done in my softcover Alpha, one of the new products, and well, I don't think there's a paper out there that can be this versatile and this much fun to draw in. I couldn't have done this drawing in any other sketchbook and have gotten this level of quality. 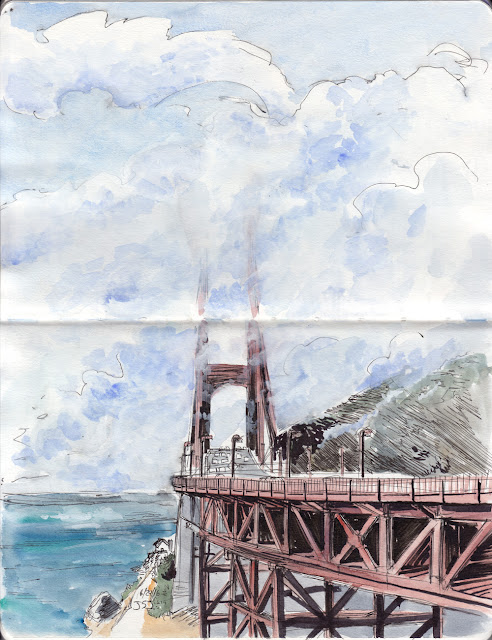