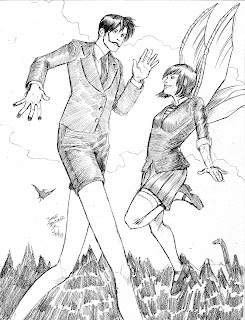 I've been really enjoying Wolverine and the X-men, it's a fun book but also it's where some of my favorite Marvel characters end up. Evan is a character from Rick Remender's amazing Uncanny X-Force run, and he's a student now in Wolverine and the X-men. I won't spoil anything character wise but I would really recommend reading both books even if you're not into superhero stuff. I think Jason Aaron and Rick Remender both really tap into what makes these people different and tell stories about responsibility and duty and violence that I think anyone who likes a good story would enjoy. It's not about the super heroics, but the people behind the masks. This is the stuff that made Marvel different from their inception.

Back from rambling, the girl is a new mutant to the school, Jia Jing. A chinese girl who appears to be made of hard gemstones and can fly on pixie wings. She's a really good contrast for Evan and I imagine at some point they'll end up as an item. I hope so anyhow, Evan I think needs a person like her in his life.
Posted by Jorge Santiago Jr, at 12:51 PM