Not every page from pencil wave 1 has been inked, but Dragon Con is this weekend and I needed some fresh inks for my portfolio. So here are the first three pages. 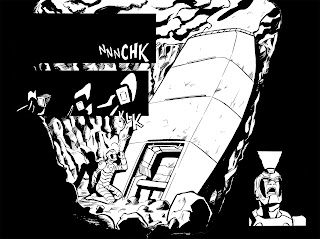 Page one was fun and interesting in that the most amount of work went into the environment. I would say that's the prevailing focus on all of these pages, is making the environment something foreign and creepy. Since this comic is meant to be read digitally (once I figure out the program to add in all the panel transitions; if anyone knows, please share the program please!) the comic will actually begin on a pure black screen with the first panel (with nnnCHK) simply outlined in white. There will be a transition to panel 2, where you see sparse lighting effects; I was trying for that funky flashlight effect, where it stutters before coming to life fully. The third panel was the most fun, which I mainly did with the G-pen nib, using the brush only for the figure and the black spotting in the crater. 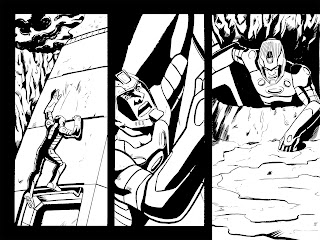 Page 2 is mainly establishing the character of Noah and his struggle out of the crater. I've not drawn the final transition panel yet, which will cover panel 3. Here he's looking down, but in the transition which will fade from this panel, Noah will be looking up and seeing where he is before the reader will. There's less to say on this one since it's more obviously straightforward. 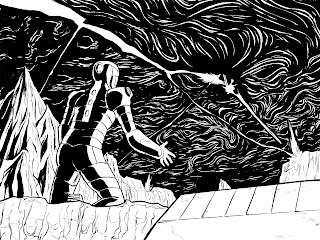 And page 3, we see the surface of Venus, which is really interesting. Venus has such thick greenhouse gasses in its atmosphere that very little light ever makes it down to the surface. As such, the planet would be insanely dark, so I was trying to illustrate it based on a NASA photo I was given on what a composite of Venus would look like based on radar data. Venus also has a HUGE amount of pressure on the surface equal to about a kilometer into an Earth ocean. So I was trying to simultaneously show the darkness of the planet and also the swirling wave like torrent of pressure that exists on this planet. Venus is very interesting, so I had fun trying to get all this across, which ends up having a Van Gogh Post-Impressionist painting feel to it. I don't mind it, but I hope at least that even if it doesn't look like Venus that it at least looks like this man is on an alien terrain. I can't wait to draw more scenes of the Venutian surface, although it did take me a while to ink the sky. I used brush exclusively on this page. I was also testing out some ideas I've taken from my professors at SCAD but also applying inking techniques I've seen used by Wade Von Grawbadger when he inks Stuart Immonen. It's less evident here as it will be in the next page. Which I'll try to post up as soon as I can.