I recently attended Dragon Con where I was a helper at the Essential Sequential table in the artist alley. I happily scanned con sketches from the uber talented artists at the table, I got them lunch, I sold art, I was happy as a clam and on top of that, I got to have lunch with Eric Canete and he looked over my portfolio of pages and gave me pointers and a helpful critique. Needless to say, this passed weekend was one of the best I've ever had.

In my portfolio were my first 4 inked Flowers for Venus pages (the pencils are all in my Stillman and Birn sketchbook and I don't want to rip them out when I can keep them all together in one place). Eric went over my storytelling, my composition, my use of spotting blacks, shot choices, and more. It was a great experience and I tried not to appear super giddy. After this great meeting though I'm determined to make Flowers for Venus and all my future comic works better than I could have done even just a few hours ago. Here are some of the edits I made to the first 3 pages in pencils that I will re-ink when I get the chance. 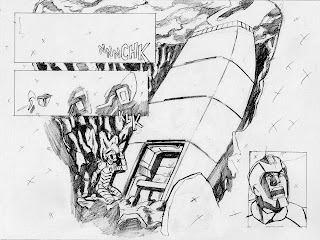 In this page, I tried to eliminate or at least minimize my use of hatching in the environment. I've been trying to use it as a way of conveying texture but as Eric pointed out to me, I'm only just muddying up what could be a really dramatic black and white only shot. This is a dude in a crater lit only by the light on his helmet, so go straight up blacks and whites only. I also redrew the final panel because it was kinda bugging me. I think it's more clear who is in the helmet this time. 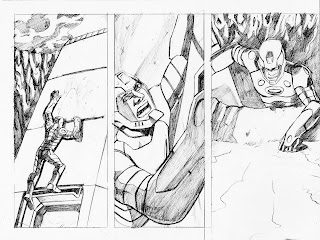 More hatching becoming spot blacks. I also made Noah's right arm nearly full black in the second panel, because (and my profs have told me this before; I just wasn't using it well enough) you can create the appearance of depth by alternating black and white in your composition. If you have a man all in silhouette in front of a white car, then he pops out visually as being closer to the reader. Eric was suggesting I should put that to work in this panel, to really push the idea that there is some depth in this very chesty shot of a man climbing. In panel 3, I consolidated my hatchings and turned them into black and I made the cracks in the ground point towards Noah. 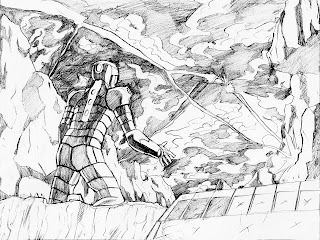 This page has the most changed I think. Eric suggested I use the rock formations to funnel the reader's eye through the page, so I've tried doing just that. I've also tried playing with the black and white composition as well in order to really put some depth in there. Noah is mainly a figure in black, the mountains are mostly white space to put them far away visually, but they also lead your eye into the valley where you see this space ship cruising through the air. Also, I've simplified the white cloud streaks a lot, mainly from having an idea now of how I want them to look. Drawing Venus's sky from the surface is pretty daunting considering the only way to know what it looks like is from radar imaging since the surface is, from what I've gathered, a sweltering high pressure pit of darkness.

Well that's what I've got update wise for this comic. I've also been working on possible prints for Anime Weekend Atlanta which I will have a table at later this month. I'll post up a dedicated AWA post including new images I'll have for sale and where I am on the artist alley map. Unfortunately Flowers for Venus won't be ready for this con, I'd rather take my time in making something fantastic than rush it to this convention where it's probably not going to appeal to the attendees. I will try, though, to give East Coasters my best shots of previous stories, KCNO and Good Night Mrs. Goose, which are available to sample on smackjeeves. Sorry this was so wordy, but this is my art blog, so I think I should go ahead and put my approach and feelings down in words while I'm at it.
Posted by Jorge Santiago Jr, at 7:38 AM