R is for REMUS 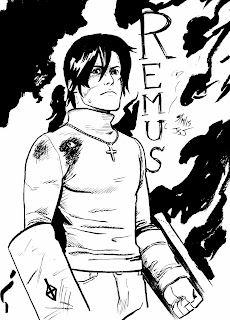 R is for Remus, first son. Well, not really, but sort of. So, I started drawing comics when I was 17, mainly just aping what I saw and what I liked but it was fun and nothing really serious came from that. Remus was the first thing I created that had some depth to him.

Remus was the son of a business man and a Romanian dancer. His dad was rarely home, and when he was, he was abusive and mean. Remus's only solace was his mother, who was both kind and naiive, and unfortunately she couldn't leave her husband as the times just wouldn't allow it and she was a stranger in America. Well Remus's father brought home danger with him, and in the middle of a skirmish, Remus's mother was killed and Remus was left at the mercy of his father's enemies, The Wolves of Sariel. The Wolves was a sect of religious vampires that sought to use their strength to fight for God's flock, using the devil's gift in the name of the Lord. So Remus joined the group, and in the 80 years since then, he's been one of the Wolves most proficient and steadfast killers. Remus is the only vampire in the Wolves that is feared by their opposite number, the Crusaders. The Crusaders were vampires who, unlike the Wolves, were victims of religious persecution or of the law being used by the corrupt. While the Wolves represented the strength that people could draw from religion and each other, the Crusaders represented the hate that festers in people and they were survivors of their own tragedies, like hatecrimes and racism.

In the end, the Wolves of Sariel was probably too big for my 19-22 year old mind, so I ended up leaving the comic aside after a while to focus on other stories like Good Night Mrs Goose and KCNO, which were more managable with smaller casts and more focus on character building than social commentary. One day I'd like to return to Wolves but in a more restricted and more pointed manner so I don't end up with my cast in various places and it feels hard to jump between them. SHEESH!